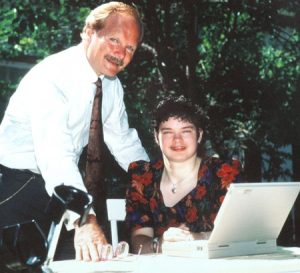 The story of the National Cristina Foundation began in Yonkers, New York when a child approached her special education teacher weeping and asked of her, “What is to become of me that I am handicapped? That teacher, Yvette Marrin, resolved to find an answer to her question and determined that what she needed for the children she taught who could not write or do their work easily on their own, was a tool that would place them on the road to independence.

One of the parents in this class was D. Bruce McMahan. His daughter Cristina had suggested to Marrin that she ask her father to donate a computer to her class. She did so, and McMahan obliged. This donation of a single personal computer to this special education classroom in 1983 sparked the development of an idea and a program that now engages the partnership of over a thousand organizations throughout the United States. 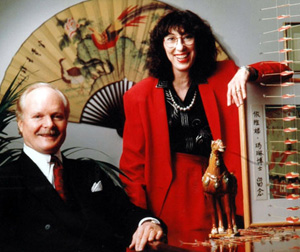 When the National Cristina Foundation was co-founded in 1984 by Dr. Bruce McMahan and Dr. Yvette Marrin, we began to address what would hopefully be our long-range contribution as innovators to the whole area of technology reuse. Our vision was that no working computer should ever be allowed to go to waste if it could be used again to make a significant difference in people’s lives.

Until our founding, there was no concept of a national donation and reuse program for previously used computer equipment. Our dream was that children and adults could utilize this equipment to develop skills that would enable them to lead more independent and productive lives. Our grassroots partners would not only be given fish but also “learn how to fish.” Through our work, our partners would learn ways to find needed computer resources in their own communities and leverage those computers in their service delivery.

National Cristina Foundation facilitates the donation of previously used computer equipment coming out of its first place of service. These donations, made by individuals, small businesses, and large enterprises, are matched with the needs of nearby organizations that provide education, rehabilitation and job training to people in need. Our work, over the years, has taken us to locations around the globe, but our focus today is on supporting organizations based in the United States. 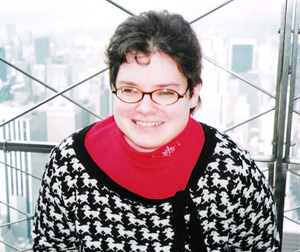 The Foundation’s efforts have created a national technology donation platform and an online knowledge community, where information is shared about the effective use of donated equipment. Collaborative partnerships, volunteer time, talent and expertise are integral parts of the National Cristina Foundation’s overall strategy. As a result, many individuals traditionally considered unemployable, such as those with disabilities and individuals with insufficient education, have become computer proficient and have entered the workforce as full contributing participants in society, often for the first time in their lives.

Technology reuse can provide an incalculable human benefit. It can, together with broadband access and skills development, help close the digital divide.

Today, dramatic improvements in computing devices happen at such a rapid pace, that businesses and consumers often leap to acquire the newest, fastest and most powerful equipment. While a large portion of used equipment can indeed be put to a second productive use to help those in need, a growing proportion of equipment is designed to quickly become obsolete. This has created a growing environmental challenge. We advocate as well for the responsible recycling of equipment that has reached the end of its life or is not able to be reused.

“No one person makes a revolution by themselves,” 19th century poet George Sand wrote. “Some revolutions humanity accomplishes without knowing how as everybody takes them in hand.” We are sharing in a revolution that is resulting in a world where technology underpins many aspects of our daily lives and the vast majority of jobs within the U.S. economy. We believe now, just as we always have, that no one should be left behind.

NCF is a proud sponsor of AFTRR.org

Home
Who We Are
What We Do
Donate Equipment
Receive Equipment

Please note: National Cristina Foundation does NOT, under any circumstances, provide computers directly to individuals.